Planting gardens is a practice as old as human civilization. During World War I and World War II it was even considered one’s patriotic duty to plant a “victory garden” in order to reduce food costs.

In light of this history, Karl Tricamo never imagined that it would be especially controversial when he decided to plant a garden in his yard in order to secure cheap, nutritious, organic produce for his family.  But just to be sure he looked up all of the relevant ordinances for Ferguson, Missouri, and in doing so he confirmed that he would not be violating any laws. Sure enough, nothing in the ordinances prohibit citizens from growing healthy, organic produce on one’s property.  In fact, the zoning ordinances specifically allow residents to cultivate community gardens and urban agricultural uses in residential areas!

But in modern America, it is always risky to deviate from what others consider “normal,” and (presumably because he planted the garden in front of his house instead of behind it) Ferguson city officials began to pester Mr. Tricamo, suggesting that his garden was illegal.  In March, shortly after he had tilled the garden in preparation for planting, the city sent a letter commanding that the yard be covered in straw and planted with grass seed – even though nothing in the city ordinances requires yards to be planted with grass or prohibits the planting of a garden on residential property.  Six weeks later city officials sent another letter demanding the removal of the vegetables from his yard because the property was not zoned for “agricultural” use, but of course the relevant section of Ferguson’s zoning ordinances explicitly allows gardens to be grown in residential areas.  Then the City sent a notice (below) alleging a violation of Ferguson ordinance number 7-133 – but that ordinance addresses the structural elements of residential buildings such as foundations, walls, windows and doors, stairways, chimneys, gutters, roofs, and buildings’ exterior surfaces.  It says nothing about yards. 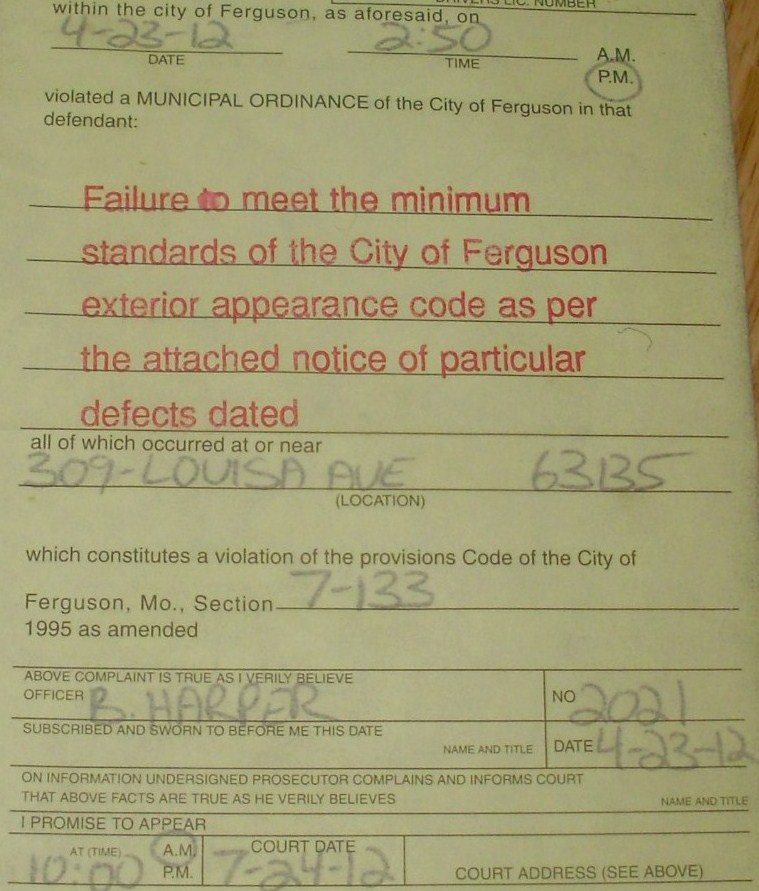 When Mr. Tricamo confronted the City about this violation notice, they rapidly backtracked and claimed that it had been sent by accident!  The City said he should disregard the notice, but have continued to insist that Tricamo’s garden is illegal.

This situation illustrates a common practice among some city officials – when all else fails in their attempt to control citizens’ behavior, they sometimes just make stuff up.  As is shown on his website, Mr. Tricamo’s has thoroughly refuted every one of the City’s claims about its authority to restrict his gardening, but Ferguson has so far refused to back down and now appears willing to waste thousands of taxpayer dollars to fight this matter in court.  Perhaps this should not be a surprise, given that Ferguson is represented by the same law firm the City of Hazelwood is paying to prevent Girl Scouts from selling cookies in front of their homes.  The sad fact of the matter is that too many local officials want to be able to control their citizens’ lives, even if the citizens’ behavior is not harming anyone else.  And if the city’s existing laws don’t give the officials the necessary authority, sometimes they’ll just make stuff up in hopes of intimidating the citizens into compliance because the citizens may not have the time or resources to stand up for their rights.

The Freedom Center of Missouri exists to help fight for those citizens.  We are taking up Mr. Tricamo’s cause and we intend to make sure that the City of Ferguson cannot bulldoze its citizens’ rights – or their gardens.  Cities only have the power given to them by their citizens and enacted by ordinance.  If you believe, as we do, that Missouri cannot afford to have city officials making up the laws as they go, please contribute to the Freedom Center’s work so that we can continue our fight for individual liberty and the rule of law!