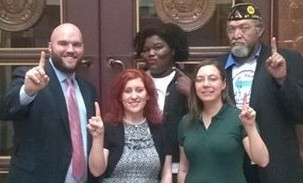 On Thursday, June 19, 2014, a three judge panel of the Missouri Court of Appeals unanimously ruled that Secretary of State Jason Kander overstepped his authority by refusing to list Natalie A. Vowell as a candidate to serve the 78th District in the Missouri House of Representatives. The appellate ruling reversed a trial court’s decision dismissing Vowell’s case.

Vowell has lived in St. Louis since July 2010, and has been working with non-profits trying to advance social justice. But despite her interest in politics and her involvement in policy discussions, Vowell had long been frustrated with a political system dominated by entrenched interests and stacked against ordinary citizens. As way of protesting that broken system, she chose not to register to vote.

In early 2013, however, friends persuaded Vowell that the political system could only improve if good people get directly involved. Inspired, she registered to vote last July, and in March declared her candidacy to serve the 78th District in the Missouri House of Representatives.

When she became a candidate, Vowell had no reason to think anyone might question her qualifications to serve. The statutory deadline for challenging a candidate’s qualifications came and went on April 24, 2014, without anyone initiating a challenge to Vowell’s candidacy. But nearly two weeks after that deadline passed, she got a stunning letter from the Secretary of State’s office stating that they were refusing to certify her name for the ballot because when the general election will be held this November, Vowell will only have been a registered voter for sixteen months.

The Missouri Constitution says that members of the House of Representatives must have been “qualified voters” for the entire two years before their election to the legislature. Although Vowell had not realized it before she declared her candidacy, Missouri courts have ruled that “qualified” does not mean “qualified to register” – which she had been since 2010 – it means one must actually have registered.

With the help of the Freedom Center of Missouri, on May 13, 2014, Vowell filed a lawsuit to vindicate her right to serve the 78th District. Her petition argued that the Secretary of State had not complied with Missouri’s laws governing challenges to a candidate’s qualifications, and also that the First Amendment does not allow Vowell’s exclusion from the ballot based on how long she had been registered to vote.

The trial judge dismissed her case without addressing either of her arguments, assuming that Vowell would not be allowed to serve in office even if she was elected. But the Court of Appeals ruled that the trial court not only should have addressed Vowell’s arguments, it should have ruled in her favor because Missouri law does not give the Secretary of State the authority he attempted to exercise. Because no one had filed a proper challenge to Vowell’s qualifications, the opinion concluded, the Secretary of State had an obligation to include her name on the ballot for the August primary election and the court was not required to address Vowell’s constitutional arguments.

“This case ended up being about more than just my candidacy,” said Vowell. “It is a perfect example of the electoral system that disenchanted me with the democratic process in the first place—and I hope this ruling gives more people the confidence to stand up to political injustice.”

“Government officials all over the country regularly try to exercise authority the law does not give them,” said Dave Roland, the Freedom Center’s Director of Litigation. “We are thrilled that the Court of Appeals put an end to the Secretary of State’s illegitimate power grab.”